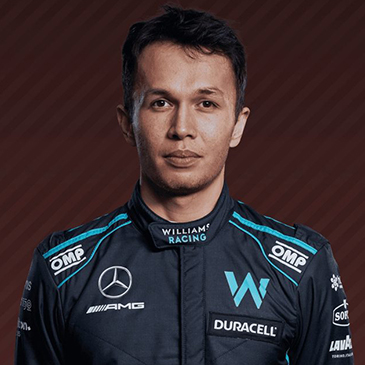 Alexander Albon is a Thai-British racing driver who was born in London, England on 23 March 1996.

Albon began his Formula 1 career with AlphaTauri, then known as Toro Rosso, after earning a surprise recall to the Red Bull programme in 2019. He quickly bagged a promotion to the main Red Bull outfit halfway through the season.

Growing up Albon spent time at Ipswich School in Ipswich, Suffolk before moving on to pursue his career in motor racing and was part of a stellar Formula 2 class in 2018, with him, George Russell and Lando Norris all now firmly established on the Formula 1 grid.

Albon is a Buddhist and attends Buddhapadipa in Wimbledon, London.

Albon made his Formula 1 debut at the 2019 Australian Grand Prix - though it was a debut that he wasn't exactly expecting to happen.

The Anglo-Thai driver was ready to move to Formula E after finishing behind George Russell and Lando Norris in the 2018 F2 Championship.

His contract was signed and sealed to race for the Nissan e.dams team in the 2018-19 FE season, that was before Red Bull came calling to bring him back into their driver programme.

He would be placed at AlphaTauri, then known as Toro Rosso, where he would partner Daniil Kvyat, who was also recalled to the Red Bull fold for 2019.

Albon became the first since Thai driver since Prince Bira in 1954 to compete in Formula 1, and despite having not turned a wheel before in modern F1 machinery, he would hit the ground running.

At only his second race Albon would claim his maiden points finish with P9 in Bahrain, but it would be at the following round in China where he really put himself on the proverbial F1 map.

A heavy crash in FP3 would leave Albon's STR14 too damaged to take part in qualifying, condemning him to a pit-lane start.

But that would provide the platform for a stunning recovery drive as he made it all the way back to P10 to claim a World Championship point, as well as his first Driver of the Day award in F1.

More points followed in Monaco, Germany and Hungary before Albon's career changed very much for the better over the summer break.

With Pierre Gasly struggling for form at Red Bull, the team made the decision to send the Frenchman back to Toro Rosso, while Albon, in his rookie year, would be promoted to race alongside Max Verstappen.

It is safe to say he would take his opportunity well, going on a run of seven straight top six finishes, while also setting an identical Q3 time to Verstappen in Japan.

Albon was set to take his first podium finish at the chaotic Brazilian GP before Lewis Hamilton punted him out of the race late on, but he would return to his usual consistency at the final round of 2019 in Abu Dhabi with a P6 finish.

All that hard work was very much worth it for Albon. On 12 November 2019, Red Bull announced that Albon would continue racing for the team during the 2020 season.

He would finish his rookie season with 92 points, earning him P8 in the Drivers' Championship.

Alexander Albon was a prolific karting racer after first starting to race competitively at just eight years old back in 2005.

Albon's next big step came in 2012 when he joined the Red Bull junior programme and embarked on his first season in open-wheel racing with a drive for EPIC Racing Formula Renault 2.0 Eurocup series.

Albon then made the move up to the Formula 3 European Championship before finishing runner-up to a certain Charles Leclerc in the 2016 GP3 series, winning four races for ART in the process.

Two seasons in Formula 2 then followed for Albon. He finished P10 in his first season with ART, but his switch to DAMS in 2018 saw him finish third in the overall standings behind George Russell and Lando Norris, who, like Albon also secured moves to Formula 1 for the following season.

Albon was not initially heading for Formula 1, though, as he was due to partner Sebastian Buemi at the Formula E team Nissan e.dams for the 2018-19 season. Red Bull agreed a compensation package with the team in order to release Albon from his contract and place him in the Toro Rosso outfit for 2019.

Alexander Albon was believed to be one of lowest-paid drivers on the Formula 1 grid following his arrival at Red Bull's junior team, formerly known as Toro Rosso, ahead of the 2019 season.

His initial salary was reportedly in the region of £130,000 a year but, having made the mid-season jump to the Red Bull senior team after Pierre Gasly was axed, his promotion would have resulted in moving up the Formula 1 money ladder.

British newspaper the Daily Express reported that Albon’s net worth is estimated at £390,000 a year, which is bolstered by lucrative sponsorship deals with brands such as Moose Cider and MDM Designs.

Alexander Albon is one of many drivers who have racing in their family's DNA. His father, Nigel, featured in series such as British Touring Car Championship and the FIA GT Championship, and he also won the Sepang 12 Hours back in 2002 driving a Porsche 911 GT3 for Jaseri Racing.

Albon's Thai heritage comes from his mother, Kankamol Albon, who was jailed for for six years after being found guilty of fraud during her time running an exotic car dealership. She was released in 2018 and is seen supporting Alex regularly in the Formula 1 paddock.

Albon lives in Mliton Keynes, where his team Red Bull are based, along with his mother, step-father, three sisters and brother.