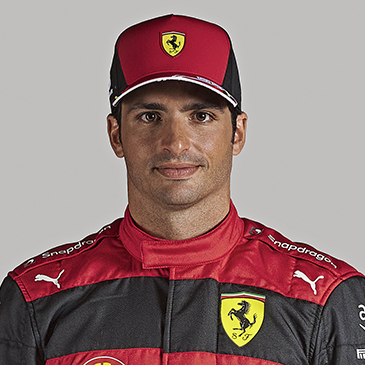 Carlos Sainz Jr is a Spanish Formula 1 driver, born in Madrid on 1 September 1994.

The Spaniard burst onto the F1 scene back in 2015 as part of the Red Bull driver programme, assigned to Toro Rosso for that season where he would partner fellow Red Bull junior Max Verstappen.

Sainz spent just short of three seasons with Toro Rosso before joining Renault towards the end of the 2017 campaign, signing for the French manufacturer on loan from Red Bull.

2018 would prove to be Sainz's only full campaign in Renault colours though, a year where he would finish behind team-mate Nico Hulkenberg in the Drivers' Championship.

But it was 2019 where Carlos Sainz Jr truly showed what he was made of, helping McLaren to P4 in the Constructors' Championship - their highest finish since 2012 - while also securing P6 for himself in the Drivers' Championship, overtaking former team-mate Hulkenberg on the last lap of the final race in Abu Dhabi to secure that position.

He went one step better in 2020 with P2 at a barmy Italian Grand Prix, helping McLaren to P3 in the Constructors' standings. It was also another P6 for Sainz in the Drivers' classification to sign off in style before his move to Ferrari for 2021.

Despite having the nickname 'Chilli', Sainz has proven to be anything but a hothead, often meticulously working his way through F1 races.

Having tested for Red Bull and Toro Rosso in the Young Drivers' test at Silverstone, Sainz was announced on 28 November 2014 as a Toro Rosso driver for 2015.

As it turned out he was to be the experienced face around the garage after 17-year-old Max Verstappen was confirmed as his team-mate for the season.

Sainz selected number 55 as his race number and finished inside the top 10 on debut with P9 at the Australian Grand Prix.

He followed that up with P8 in Malaysia, while he scored his best result of the season with P7 at the United States Grand Prix.

Overall he would record 18 points in his first season, earning him P16 in the Drivers' Championship. Verstappen meanwhile was comfortably ahead with 49 points.

Sainz kicked off his 2016 with another points finish in Australia, though come the Spanish GP he had a new team-mate in the form of Daniil Kvyat after the Russian was demoted back to Toro Rosso and replaced by Verstappen.

Sainz was far more productive in his second season of F1, scoring points in 10 of the 21 rounds, including P6 finishes in Spain, USA and Brazil.

A points total of 46 saw him rise to P12 in the Drivers' Championship when all was said and done.

Once again Sainz was in the points at the season-opener in Australia, this time around finishing P7, while a bold tyre strategy earned him P8 in China.

Sainz enjoyed one of his strongest races so far in his career with P6 in Monaco, holding off Lewis Hamilton, but his career was to change completely later that year.

During the weekend of the Singapore Grand Prix, in which he finished a career-best P4, it was announced that he would leave Toro Rosso to race for Renault on loan in 2018.

But during the Japanese Grand Prix weekend, it was confirmed that Sainz would replace Jolyon Palmer and partner Nico Hülkenberg at Renault beginning with the 2017 United States Grand Prix.

Sainz finished P7 in his first race with the team, even outqualifying Hulkenberg, something which Palmer had failed to do in 2017, although it meant very little as Hülkenberg opted not to post a lap time in Q2 due to his impending grid penalties.

His combined points from Toro Rosso and Renault would give Sainz a career-high finish of P9 in the Drivers' Championship with 54 points to his name.

2018 was without doubt Renault's best season since returning to F1 as Sainz and Hulkenberg helped lift the team to P4 in the Constructors' Championship.

Sainz wasn't able though to beat his highest points tally, scoring 53 for the 2018 campaign as he dropped to P10 in the Drivers' standings.

He did score points in 13 of the 21 rounds, but was comfortably outperformed by Hulkenberg who finished the season with 69 points to take P7 in the Championship.

It had been announced though on 16 August 2018 that Sainz would become a McLaren driver for 2019, replacing compatriot Fernando Alonso.

For the first time Sainz was free of the Red Bull shackles, something which he has talked about on many occasions.

And indeed Sainz would flourish in a rejuvenated McLaren team, and despite a torrid run of luck at the start of the season he was still able to recover to finish P6 with a total of 96 points, comfortably the best haul of his career so far.

He would finish one point clear of Pierre Gasly who started the season at Red Bull, and four clear of Alex Albon who had replaced him at the Austrian team over the summer break.

Sainz secured P6 in the Championship by passing ex-Renault team-mate Hulkenberg on the last lap to finish the race P10.

He would describe it as feeling like winning the World Championship to him, not that we saw any of this on TV, leaving Sainz frustrated that the action had not been broadcasted.

To be fair his anger was understandable - he had just become the first non-Mercedes, Ferrari or Red Bull driver to finish in the top six since 2015.

On top of the fantastic results, Sainz also struck up a great relationship with McLaren team-mate Lando Norris in 2019, and it's safe to say that they remained our favourite duo of the 2020 campaign, especially since we knew time was ticking on that bromance.

That's because Sainz was confirmed as a Ferrari driver for 2021 after Sebastian Vettel was controversially told that he wouldn't be given a contract extension before the 2020 campaign had even begun.

Sainz though certainly didn't take his eye of the ball in his final season with McLaren, scoring a career-best 105 points to finish P6 in the Drivers' Championship again.

Without doubt the highlight of his season was a P2 finish at the Italian Grand Prix, the best result of his career, though he wasn't actually very happy with it. The Spaniard would extract every last bit of performance out of the McLaren, but it wasn't enough to deny Gasly a first win of his career in what was a gripping charge to the chequered flag.

Sainz could also count himself unlucky when a tyre failure at the British Grand Prix saw him fall from P4 in the closing stages, while a power unit issue meant Sainz couldn't take the start in Belgium.

A scary incident involving Sainz at the Tuscan Grand Prix during a Safety Car restart, followed by a misjudgement which saw Sainz clatter the wall when returning to the track at Sochi, proved major blows for the Spaniard's chances of P4 in the Drivers' standings.

Sainz would though finish in the points at 12 of the 17 races in 2020, setting down a good marker ahead of his move to Ferrari for 2021 where he will partner Charles Leclerc.

Carlos Sainz made an immediate impression on the karting scene in 2008, winning the Asia-Pacific KF3 title and finishing runner-up in the Spanish Championship. The following year, he won the highly coveted Junior Monaco Kart Cup.

Joining the Red Bull young driver programme in 2010, Sainz continued his career in Formula BMW and also got his first taste of action in Eurocup Formula Renault 2.0 and European F3.

Sainz signed up with Carlin in 2012 as Formula 3 then became his main focus. However, he would remain firmly out of title contention.

2014, his last competitive season in the minor classes before bagging a seat with Formula 1 team Toro Rosso, ended in glory as he won the Formula Renault 3.5 series with DAMS, seeing off the challenge of nearest competitor Pierre Gasly.

Having first signed for McLaren ahead of 2019 season, Sainz was reportedly earning an estimated annual salary of £3million at McLaren, but that pay packet has jumped up to around £5.86m with Ferrari.

Sainz's main sponsor is Spanish beer company Estrella Galicia who have had an association in place throughout Sainz's Formula 1 career.

Carlos Sainz Sr is a two-time World Rally Championship champion with Toyota in 1990 and 1992 and is also a four-time Dakar Rally winner, a feat achieved with three different constructors. His most recent win came in 2020, winning with Mini at the age of 57.

Carlos Sainz Sr was also a talented footballer and had trials with Real Madrid and was also a squash champion at the age of 16. Sainz is a regular face in charity football matches.

Sainz Jr was in a relationship with Angela Gastanaga but the pair split. Sainz Jr has since been dating journalist and PR person Isabel Hernaez Fuster.

They have appeared together in Instagram posts and Isabel has also been seen in the past at Formula 1 races.