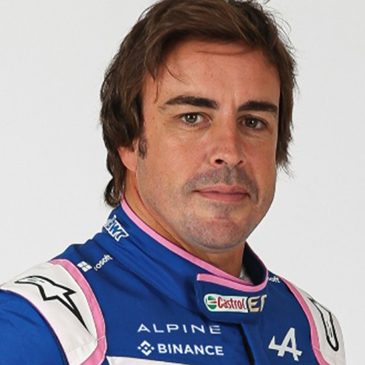 Fernando Alonso is a Formula 1 driver from Oviedo, Spain and a two-time Formula 1 World Champion.

The Spaniard joined the grid in 2001 and, despite scoring no points, enjoyed a solid season with Minardi.

He received various offers for 2002 but chose to become Renault's test driver. This led to a 2003 race seat and he stayed with the French team for four seasons, winning his two World Championships to date in 2005 and 2006.

Alonso then left for McLaren, signing a three-year contract. However, he'd only stay for one. Missing out on the title by just a point, his inter-team battle with rookie Lewis Hamilton caused a rift between himself and the team, and both parties were happy to terminate his contract early.

After spending two years back with Renault, winning two races (including the infamous 2008 Singapore Grand Prix), he then joined Ferrari in 2010.

The Italian team never provided him with the best car on the grid, but he came close to adding to his two titles nonetheless, missing out at the final race twice. He left in 2015 having won 11 races for them.

From there Alonso had an unsuccessful and frustrating second spell at McLaren-Honda between 2015-18. The cars lacked pace and reliability and, despite his best efforts, Alonso never managed to finish higher than P5.

In fact, Honda still won't have anything to do with him following the famous "GP2 engine" rant at the 2015 Japanese Grand Prix.

The Spaniard returned in 2021 with Alpine, marking his third stint with the team formerly known as Renault.

Outside of Formula 1, Alonso has been pursuing the Triple Crown. He won Le Mans in 2018 and 2019, but is yet to conquer the Indy 500. He also made his Dakar Rally debut in 2020, and said he plans to return to both Indy and Dakar in the future.

Alonso joined Formula 1 when he became a test driver for Minardi for the 2000 season. He impressed enough to be given a race seat for 2001 and managed to out-perform team-mate Tarso Marques.

These performances encouraged various teams to offer him a seat for 2002. He turned them down to become Renault's test driver in the hope that it would lead to a seat at the French team for 2003 and beyond.

It did, and he repaid their faith. The Spaniard became the sport's youngest pole-sitter at the Malaysian Grand Prix and then took a P2 finish in his home race. The highlight of the season came in Hungary, where he secured his first win, becoming F1's youngest ever victor. He ended the season in P6 with 55 points.

Despite failing to add to his victory in 2004, Alonso enjoyed another successful season, improving on his points total and finishing position. 59 points earned him P4 in the standings.

2005 was the season though where Alonso established himself as one of the best around with his first title. This was largely down to his excellent start as he picked up three wins and two further podiums in the opening five races.

Kimi Raikkonen soon became Alonso's biggest challenger, with his McLaren quicker than the Renault. The Finn began to take more wins, but Alonso maintained the upper hand through superior reliability and consistency.

Such consistency gave Alonso the chance to become the youngest World Champion ever in Brazil. He took it, finishing in P3, and ended the season with seven victories and 133 points, 21 clear of the Finn.

Despite interest from Ferrari, he chose to stay at Renault for 2006. Once again, he made a strong start, winning six of the nine opening races and finishing the other three in P2. This gave him the Championship lead at the halfway point, but Schumacher managed to stay close behind.

Five wins for the German gave him the lead with two races to go. However, his engine failed him in the penultimate race, giving Alonso the win and a substantial lead in the standings. He increased it in the final race, finishing in P2 to win his second title, making him the youngest ever double World Champion at the time.

Alonso then left for McLaren, signing a three-year contract. He made a decent start to life there, leading the Championship after two races courtesy of P2 and P1 finishes. However, things quickly turned sour.

Feeling that the team were giving preferential treatment to Lewis Hamilton, his relationship with them fell apart. After it escalated to the point where he and his agent threatened to release emails that exposed what became known as 'Spygate', McLaren agreed to allow him to leave at the end of the season.

On track, his results remained decent, and he was in with a chance of winning his third title heading into the final race. He finished four places ahead of Hamilton but Raikkonen surpassed them both with a win. Alonso ended the season on 109 points, level with Hamilton, but finished behind him on countback.

Two disappointing years at Renault followed, with the Spaniard only picking up two victories. The first was tarnished as it came courtesy of 'Crashgate' when Renault ordered Nelson Piquet Jr to crash to aid Alonso's ultimately successful efforts to win in Singapore.

He got himself back into title contention with a move to Ferrari in 2010. After winning the opening race, he fell behind the competition due to the car's lack of development. However, a run of seven podiums and four wins gave him the Championship lead heading into the final race.

Despite this, a strategy error from his team resulted in him being stuck behind Vitaly Petrov in P7. He was unable to pass the Russian, while Sebastian Vettel stormed to victory, handing Red Bull the title with Alonso four points behind in P2.

2011 saw Vettel and his team assert their dominance on the sport, with Ferrari failing to give Alonso a car capable of challenging them. Despite this, he still managed one win, 10 podiums and 257 points.

Red Bull was faster again in 2012, as was McLaren, but Alonso somehow managed to take the fight to Vettel. Despite winning just three races all year, he headed into the final race just 13 points behind the German.

He looked set to become a triple World Champion when his rival spun at the start. However, while he finished in P2, Vettel recovered to finish in P8 and win the title by three points. Given the machinery he had, many consider this to be Alonso's best season.

He took P2 once again in 2013 with two wins and 242 points as Red Bull enjoyed their most dominant season yet.

After the 2014 season, in which Ferrari built a car rarely quick enough for podiums, Alonso left for McLaren, who were entering the first year of a new partnership with Honda.

The move would prove to spell the end of his time in F1 competing for titles as the cars provided didn't have the pace or reliability to consistently fight for points, let alone wins.

He continued to show his talent, often out driving the car to finish as high as P5, but had grown tired of driving such poor machinery by the time he left the grid in 2018.

The Spaniard made his return to Formula 1 though in 2021, marking his third spell with the team formerly known as Renault.

Fernando Alonso received his first go-kart when he was three after his sister didn't want it and was granted a racing license for it two years later.

He moved on from karting to car racing at the age of 17. The first championship he competed in was the 1999 Euro Open by Nissan. Driving for Campos Motorsport, he won it, taking victories in five of the eight-race weekends.

A reward for winning the title was the opportunity to test a car at a higher level. Therefore, he got the chance to drive a Formula 1 car for the first time at the end of 1999. His performances led to Minardi signing him as their test driver for the 2000 season.

Alongside this, he also raced in the Formula 3000 Championship. Finishing in P2 and P1 in the final two races, he ended the season in P4, four points behind Mark Webber.

His ability led to him driving for top teams, receiving highly lucrative contracts from both them and various sponsors. These, along with the prize money he's received, make him one of the richest motorsport drivers in the world.

In 2018, during his final season in F1, he ranked number 39 on Forbes' list of highest-paid athletes, making around $33million (£24.3m). The year before, they put him at number 77 in their list of highest-paid celebrities. He has made it onto the former list every year since 2012.

According to celebritynetworth.com, he's today worth $240million (£177m), with his new Alpine deal reportedly earning him around £15million a season.

Alonso can nearly always be seen wearing sunglasses from Kimoa, a fashion brand sponsor where he is a founding investor, and ahead of the 2021 season he announced a personal sponsorship deal with Spanish fibre and mobile telecommunications operator, Finetwork.

The Spaniard is a goodwill ambassador for UNICEF and supports the Sightsavers International foundation, which works to combat blindness in developing countries.

Alonso married Spanish singer Raquel del Rosario in 2006 and the pair stayed together for five years before divorcing at the end of 2011 following rumours that he was having an affair with a Swiss supermodel.

Since then he's had multiple relationships with various models and TV presenters. He is currently with Italian model and TV personality Linda Morselli.

He has no children, listing that among the sacrifices he made for his Formula 1 career in a 2018 FIA press conference. He's since said he's open to the idea of starting a family.