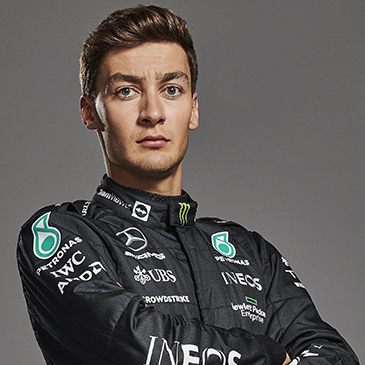 A member of the Mercedes junior programme, Russell joined Formula 1 as the reigning Formula 2 Champion in 2019 to drive for Williams.

Although he ended the season as the only driver with no points, he did impress with his pace, beating then team-mate Robert Kubica 21-0 in qualifying.

He continued to do so in 2020, reaching Q2 nine times and not being beaten once by new team-mate Nicholas Latifi. Sundays were less successful as he again failed t0 score points in his Williams, but he did end his wait for a top-10 when standing in for Lewis Hamilton at the Sakhir Grand Prix and hugely impressed throughout the race weekend.

Such a performance increased calls for him to be given a Mercedes seat, but he ultimately stayed put for the 2021 campaign.

Despite his young age, Russell has never been shy to make big career decisions.

At the end of 2014, he sent Toto Wolff a message while in Abu Dhabi for a GP3 test. The two set up a meeting, and Russell told him he would race in Formula 3 in 2015 and had done tests with Carlin and Mucke, the latter of which used Mercedes engines - naturally, Wolff suggested he went with Mucke.

Russell would choose Carlin, and emailed Wolff explaining his choice, to which the Austrian replied: "Great to meet you but I think you're making the wrong decision."

It's safe to say it worked out in the end.

George Russell enjoyed a very similar junior path to that of Charles Leclerc's - both of them won the GP3 and F2 titles back-to-back and Russell is never afraid to remind everyone of that fact.

Upon beating Lando Norris to the F2 title in 2018, Russell was rewarded with a spot on the F1 grid with the struggling Williams outfit.

2018 had been a very poor season for the team, but in pre-season testing for 2019 it quickly became apparent that things were to get worse - that being because they failed to show up for the start of it.

Russell's only real competition for 2019 was with his team-mate Robert Kubica - a battle which over one lap he dominated after winning the qualifying head-to-head 21-0.

Kubica though was the one who scored Williams' only point of the 2019 campaign with P10 in the German GP thanks to penalties for both Alfa Romeo drivers, while Russell would come home P11, his best result of the season.

The Briton though was clearly the faster driver of the pair in 2019, and at the Hungarian Grand Prix he grossly outperformed in the Williams during qualifying, coming within a tenth of escaping Q1.

Russell would suffer his first retirement of the season in Singapore after he was shunted into the barriers by Romain Grosjean, while another DNF followed in Russia.

He would finish the season P20 and last in the Drivers' Championship as the only driver without a point in 2019.

But despite finishing behind team-mate Kubica in the standings, in the eighteen races finished by both drivers, Russell finished ahead of Kubica in sixteen of them.

After brief talks of a possible Mercedes drive for 2020, Russell was confirmed to be staying at Williams with a new team-mate in the form of Canadian driver Nicholas Latifi.

While that year's Williams was certainly more competitive than its predecessor, it remained the slowest car on the grid more often than not.

Despite this, Russell managed to drag his FW43 into Q2 in nine of the 16 qualifying sessions he drove it for and beat Latifi in every single one of them. Of the drivers in the bottom three teams, he was comfortably the most impressive on Saturdays, and developed a reputation as one of the best qualifiers on the grid.

The Brit continued to struggle on Sundays though, often dropping down the order at the start and spending his races stuck at the back of the grid fighting his fellow backmarkers.

A huge opportunity for him to score his first points in F1 presented itself at the Emilia-Romagna Grand Prix as he found himself running in P10 with just 12 laps to go. However, disaster struck when, under the Safety Car, he lost control trying to warm up his tyres and crashed into the wall, ending his race.

Just three rounds later though, he was given the chance to make amends when he was called up to replace Hamilton, who had tested positive for COVID-19, for the Sakhir Grand Prix, and it was a chance he took.

After pushing Bottas hard in qualifying, he had the upper hand on the Finn throughout the race and would have almost certainly won if not for a pit-stop error from Mercedes and a late puncture. He did at least recover to take P9 and his first points in the sport, but having a victory taken away from him was heartbreaking nonetheless.

The performance did at least enhance his reputation and led to many calling for him to replace Bottas at Mercedes. With 2021 contracts already signed and sealed though, he stayed with Williams.

He would move up to the KF3 class in 2011, winning the SKUSA Supernationals title and becoming CIK-FIA European Champion, a title he defended successfully in 2012. In his final year of karting in 2013, Russell finished P19 in the KF1 CIK-FIA World Championship.

He would win the BRDC Formula 4 Champuionship in 2014 and in December of that year became the youngest-ever winner of the prestigious McLaren Autosport BRDC Award to earn himself a £100,000 cash prize, British Racing Drivers' Club membership and a Formula One test with McLaren.

In February 2015, Russell was announced as one of the twelve drivers selected to join the British Racing Drivers' Club SuperStars programme, the youngest-ever recruit to the scheme.

After two seasons in the FIA Formula 3 European Championship Russell stepped up to GP3, winning the title in his first season, before doing the same again one year later in his debut F2 season.

As one of the grid's youngest and least experienced drivers, Russell unsurprisingly earns less than the vast majority of his colleagues. Even so, the Brit reportedly brings in a tidy $1,2million a year, according to the 2020 edition of Business Book GP.

This is partly due to the multi-year deal he signed with Williams in 2019, which alone is thought to be worth around $350,000 per season. This would have been lower in 2020 though as he took a 20% pay cut due to the financial impact of the global pandemic on the British team.

As well as that base salary, Russell also earns a huge amount from various endorsements and sponsorships. His deals are with Mercedes, AMG, BRDC, Bell Helmets, Alpinestars, and Puma.

George Russell was born to Alison Russell and Steve Russell - he also has a brother called Benjy.