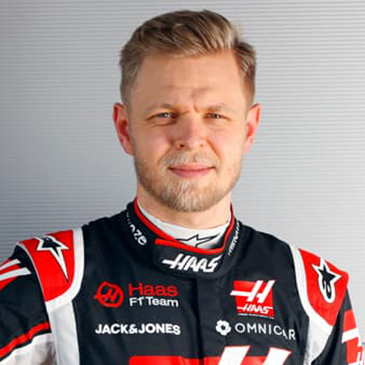 Kevin Magnussen is a Danish racing driver, born in Roskilde on 5 October 1992.

Magnussen made his F1 debut at the 2014 Australian Grand Prix, joining McLaren for that season to replace the departed Sergio Perez.

He would score a P2 finish on debut, making Magnussen the first rookie to achieve that since Lewis Hamilton did it in 2007, ironically also for McLaren.

For 2015 Magnussen would be demoted to the reserve driver role at McLaren to make way for a returning Fernando Alonso, though come October of that year he was released from his contract with the team.

After talks with Haas and Manor Racing, Magnussen was confirmed as a Renault driver for 2016, though that would last only one year before he did make the move to Haas, replacing Esteban Gutierrez.

Magnussen has enjoyed the most stable period of his F1 career with Haas.

Interestingly Magnussen's career came very close to stopping at junior level - between Formula Ford in 2008 and unexpectedly securing sponsorship for Formula Renault in 2009, Magnussen was forced to abandon his racing career and work as a factory welder due to lack of funding.

Magnussen races with number 20 on this car because it was the number he used when he won the 2013 Formula Renault 3.5 Series title with DAMS.

He currently lives in Dubai.

Kevin Magnussen earned his first F1 drive in 2014 as part of the McLaren team, and P2 on debut was a fine way to begin his stint with the Woking outfit.

He would originally finish P3, finishing just 2.2 seconds behind Red Bull's Daniel Ricciardo, but when the Aussie was later disqualified from his home race due to fuel irregularities, that became P2, making Magnussen the first rookie to finish second on debut since Jacques Villeneuve at the 1996 Australian Grand Prix.

Magnussen would score 12 points finishes in total that year, including a best result of P5 at the Russian GP.

It wasn't enough to beat experienced team-mate Jenson Button though who scored 126 points compared to Magnussen's 55, putting the Briton P8 in the final Championship standings, while Magnussen would be forced to settle for P11.

That rookie campaign also wasn't enough for Magnussen to earn another year - instead he was demoted to the reserve and test driver role for 2015 to make space for Fernando Alonso's return to the team.

Nonetheless Magnussen was set to start at the season-opener in Australia with Alonso not medically cleared to compete after suffering a concussion in testing.

However, Magnussen's car would be struck down by an engine failure on the formation lap, leaving him unable to compete.

That turned out to be Magnussen's last appearance for McLaren because on 5 October 2015, he received an e-mail from the personal assistant of McLaren chairman, Ron Dennis, releasing him from the team.

They would make this public on 16 October.

Magnussen reportedly then entered discussions with Haas and Manor Racing, while he also teased a move to another series by testing a Mercedes DTM car and Porsche's LMP1 car.

However, on 3 February, Renault confirmed Magnussen had joined them for the 2016 campaign.

It wasn't a season to remember though for the Dane as he scored just two points finishes with P7 in Russia and P10 in Singapore, earning him 7 points and P16 in the standings.

After this Magnussen was on the move again, this time joining American outfit Haas to partner Romain Grosjean.

By driving for Haas, Magnussen became the first driver in the turbo-hybrid era to have been powered by all four engine manufacturers.

That year he would also make himself a new enemy in the form of Nico Hulkenberg, shockingly saying "suck my balls" to the Renault man after the pair confronted each other after the Hungarian GP.

Magnussen would score points at the Chinese, Monaco, Azerbaijan, Japanese and Mexican GPs to amass a total of 19, earning him P14 in the Championship, one place and nine points behind Grosjean.

2018 proved to be Haas' strongest year in F1 as the team secured P5 in the Drivers' Championship, while Magnussen set his best points total for a season with 56 points, inspired by P5 finishes in Bahrain and Austria. P9 in the drivers' standings would be his reward.

The Dane didn't impress several of his fellow drivers though - Charles Leclerc called him "stupid" over team radio at the Japanese Grand Prix after his attempt to pass the Haas driver resulted in contact.

Pierre Gasly also voiced his displeasure over Magnussen's defensive driving after the pair collided in Azerbaijan.

Sadly for Haas, Magnussen's robust style made a difficult 2019 even worse as the Dane collided with team-mate Grosjean on several occasions.

The VF-19 had the habit of performing well in qualifying, but sinking like a stone in race trim.

Magnussen's first collision with Grosjean would come in Spain, but things escalated at the British GP when the pair collided on the first lap and both suffered race-ending damage.

They would make contact again at the rain-affected German GP, though both escaped to record a double-points finish - the problem was at this point team principal Guenther Steiner had seen enough of these incidents.

Magnussen would emerge from 2019 as the highest-scoring Haas driver, recording 20 points thanks to top-ten results in Australia, Spain, Germany and Russia to finish P16, 12 points clear of Grosjean.

Despite talk of Hulkenberg becoming Magnussen's team-mate for 2020 in what would have been an interesting partnership to say the least, Haas chose to stick with Grosjean.

Like the vast majority of Formula 1 drivers, Kevin Magnussen began his racing career in karting before transitioning to Formula Ford in 2008.

He would soon get a taste of that winning feeling as he won the Danish Formula Ford Championship after emerging victorious in 11 of 15 races for Fukamuni Racing.

The association with Motopark Academy continued for the next couple of years. His stand-out results being a runner-up finish in Formula Renault 2.0 NEC and a third-place finish in the final standings of the German Formula 3 Championship in 2010.

Magnussen switched to the British Formula 3 Championship in 2011, but missed out on the title to a dominant Felipe Nasr.

The Dane spent the next couple of years in the Formula Renault 3.5 Series, finally adding another championship title to his collection in 2013 with DAMS.

Having been part of the McLaren's young driver programme throughout, Magnussen was given the call-up to the Formula 1 team ahead of the 2014 season, replacing Sergio Perez.

Heading into his fourth season with American outfit, Kevin Magnussen is reportedly earning an annual salary of around £1million with his contracts usually coming in the form of one-year extensions.

The racing connection runs deep in the Magnussen family. His father, Jan, has a prolific racing career and is a four-time Le Mans GT class winner. He too made his way up to the Formula 1 ranks, driving at the 1995 Pacific Grand Prix for McLaren and spending one-and-a-half seasons with Stewart in 1997 and 1998.

His little brother Luca could follow in Kevin and Jan's footsteps.

Kevin got married in October 2019 to partner Louise Gjorup after revealing at the 2018 Mexican Grand Prix that he had popped the question.