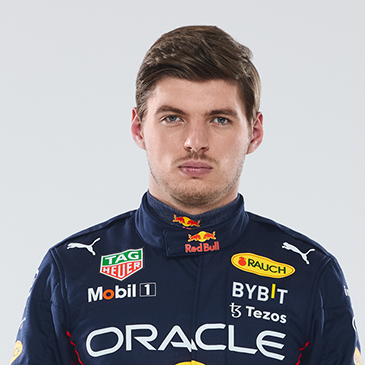 Max Verstappen was born in Belgium on September 30th 1997, but races under the Dutch flag. Since joining the grid at the age of 17, he has gone on to become Formula 1's youngest ever race winner and one of the most popular drivers in the sport.

His F1 career began with Toro Rosso (now AlphaTauri) in 2015. There, he hugely impressed, finishing as high as P4 at the Hungarian Grand Prix and proving himself to be one of the biggest talents around.

After making a strong start to the 2016 season, he was then chosen to replace Daniil Kvyat at Red Bull prior to the Spanish Grand Prix. At that very race, he made history by becoming the youngest ever driver and the first Dutchman to win a Grand Prix.

Since then, he has gone on to establish himself as one of the quickest and most exciting drivers on the grid, becoming renowned for his aggressive style of driving, which often results in stunning overtakes.

Verstappen was the biggest challenge to Mercedes in 2019 and 2020, backing up the idea that he is a very real candidate to be a future World Champion.

When not travelling with the F1 circus, Verstappen lives in Monte Carlo and has done so since 2015, in the same building as other drivers including Daniel Ricciardo.

The Dutchman's parents both come from racing backgrounds. His father, Jos Verstappen, was also a Formula 1 driver, while his mother, Sophie Kumpkin, had a racing career in karting herself.

As well as winning multiple races in the sport, Verstappen has also won FIA Personality of the Year and FIA Action of the Year on multiple occasions.

At just 17 years of age, Verstappen became the youngest ever Formula 1 driver when he was snapped up by Toro Rosso for the 2015 season, being paired with Carlos Sainz Jr. Was he too young, as many believed? Well, as the saying goes, if you're good enough, you're old enough, and he was definitely good enough.

He quickly showed why they gave him a seat so soon, getting points in 11 of the 14 races he finished, with the highlight being two stunning P4 finishes in Hungary and USA, with him showing his incredible ability in the rain. He ended his rookie year with 49 points, placing him P12 in the standings.

He started 2016 in equally impressive fashion, getting a top-six finish in Bahrain and P8 in China. Things then got even better for Verstappen when Red Bull called him up to replace Daniil Kvyat before the Spanish Grand Prix. He stunned the world by holding off the Ferrari of Kimi Raikkonen to win it, becoming the youngest ever race winner and the first Dutchman to do so, causing French newspaper L'Equipe to say he was 'already a great'.

He went on to enjoy a solid first season with the team, getting six further podiums and amassing a total of 204 points to take P5 in the Drivers' Championship, ahead of Raikkonen and just eight points behind Sebastian Vettel, despite starting the season in a midfield car. The highlight, along with Barcelona, was his stunning wet-weather drive in Brazil, as he fought from running in P16 with 15 laps remaining to finish in P3.

Life was a bit more difficult for the Dutchman in 2017 as he was faced with extremely poor reliability, retiring from seven of the first 14 races. The sole high point came in China when he charged through the field to finish P3 after starting P16, passing and then holding off team-mate Daniel Ricciardo in the process.

His bad luck finally came to an end in race number 15 as he took his second ever win in Malaysia before going on to stand on the top step of the podium again in Mexico, where Lewis Hamilton referred to him as the "brightest young star we’ve seen for some time". However, he still finished the season behind the other five drivers from the big three teams, scoring just 168 points. On the bright side, he was handed a new three-year contract, silencing rumours linking him to Ferrari and Mercedes.

The start of the 2018 season saw Verstappen receive more criticism and pressure than ever. He was involved in incidents and made costly errors in each of the first seven race weekends, leading to many labelling him as immature and stubborn. Max isn't one to be bothered by such things, though.

After recovering from a qualifying crash in Monaco to finish P9, he then went on the best run of his career, winning in Austria and Mexico, and getting eight podiums elsewhere. He would've ended the season with three wins, but Esteban Ocon took him out in Brazil while trying to un-lap himself. Verstappen, who was leading at the time, let his emotions get the better of him and physically confronted Ocon after the race, sparking what was already a tense rivalry.

Nevertheless, his second half of the season resurgence was enough to give him his best-ever points tally, 249, and Championship position, P4, at the time, and also enough for him to beat Ricciardo over the course of a season for the first time.

He then did even better in 2019, enjoying the best year of his career to that point. With his car considerably slower than Mercedes in the opening stages of the season, he still finished in the top five in each of the first eight races, getting podiums in Australia and Spain.

He was then given more competitive machinery and used it to win in Austria, passing Charles Leclerc with just one lap left.

Thriving in the sheer chaos in Germany and Brazil, he stayed cool while others crumbled to add two more wins to his tally, also getting podiums in Hungary, Singapore, USA and Abu Dhabi. This form was enough to give him his first-ever top-three finish in the standings come the end of the season.

Things only got better for Verstappen in 2020 as he truly established himself as a top-three driver on the grid, offering excellent competition for the record-breaking Mercedes team.

He seemed to find a real point of consistency throughout the season and, in the races which he finished, he ended on the podium in all but one.

Within the campaign came two race victories, the first in the 70th Anniversary Grand Prix and his second came in the season finale in Abu Dhabi as he stormed to victory, finishing 15.976 seconds ahead of Valtteri Bottas, who he finished just nine points behind in the Drivers' Championship.

2021 sees Sergio Perez join Verstappen at Red Bull in place of Alex Albon so it will be interesting to see how he performs against what should prove to be a more competitive teammate.

Max Verstappen began karting at just four years of age and rose to the very top of the karting ranks when he won the 2013 World KZ championship at Varennes-sur-Allier in France.

His first taste of racing cars came when testing for various Formula Renault 2.0 teams in 2013 but his first competitive debut came a year later in the short-lived Florida Winter Series, a racing category organised by the Ferrari Driver Academy.

2014 would also see Verstappen move up to the FIA European Formula 3 Championship for Van Amersfoort Racing. He would finish his maiden campaign in third spot behind his long-time racing rival Esteban Ocon and second-placed Tom Blomqvist.

While other drivers have spent more time developing their ability in Formula 3 and Formula 2, Verstappen made one almighty jump to Formula 1.

After joining the Red Bull young driver programme in August 2014, he was confirmed as a Formula 1 driver for junior team Toro Rosso ahead of the 2015 season - just six days separated the two major announcements.

With the 2015 season in mind, Verstappen took part in the first practice session at the 2014 Japanese Grand Prix, becoming the youngest person in history to participate in a Formula 1 race weekend just three days after turning 17.

The Dutchman was believed to be on an annual salary of £10million, but the Daily Express claim that was boosted to £12million a year after he signed a new three-year extension in January 2020 that will expire at the end of the 2023 season. Other sources, such as racefans.net, report his salary is as high as £18million.

Given the buzz and excitement that continues to surround one of hottest Formula 1 talents, Verstappen has a whole host of personal sponsorship deals.

The Red Bull driver also featured on Forbes' top 30 under 30 in 2018, a list which captures the next generation of talent.

It perhaps came as no surprise that Max Verstappen decided to become a racer given that his father, Jos, was an established Formula 1 driver himself from 1994 to 2003.

Jos raced for the likes of Benetton, Tyrrell and Minardi, making 107 appearances before the 2003 Japanese Grand Prix marked the end of his career.

Max grew up in the racing paddock, with his mother, Sophie Kumpen, also a pretty successful karter who raced against other Formula 1 racers such as Giancarlo Fisichella and Jarno Trulli.

Max has a younger sister called Victoria, who is part of the Red Bull Netherlands team with her predominant focus on the 'Unleash the Lion' fashion line.

The Dutchman is currently dating model Kelly Piquet, daughter of three-time F1 World Champion Nelson Piquet. She had previously dated Daniil Kvyat and had a child with him.

Verstappen had been in a relationship with German student Dilara Sanlik, though the pair split in 2020. He had been previously linked to romances with fashion blogger Roos Van Der Aa, hockey player Maxime Pourquie and Belgian model Joyce Godefridi.