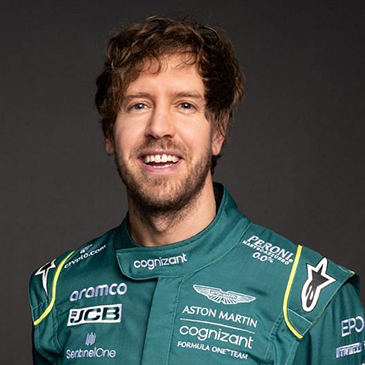 Sebastian Vettel is a German racing driver who was born in Heppenheim on 3 July 1987. He is one of the most decorated Formula 1 World Champions of all time with four consecutive titles won between 2010 and 2013 when his former team Red Bull were the dominant force in the sport.

Vettel began his Formula 1 career with BMW Sauber, making his debut at the 2007 United States Grand Prix before being quickly called up to the Red Bull junior team to race for Toro Rosso.

Vettel was then promoted to the senior team in 2009, spending six seasons with the team before making the move to the iconic Ferrari team ahead of 2015 season.

Sadly after six years that relationship came to a rather underwhelming end with Vettel then signing a deal with the returning Aston Martin outfit for 2021.

Vettel resides in Switzerland and supports German football team Eintracht Frankfurt. Growing up, he idolised the 'three Michaels' - Michael Jackson, Michael Jordan and the legendary seven-time Formula 1 World Champion, Michael Schumacher, whose son Mick he welcomed onto the grid for 2021.

Vettel had dreams of being a singer growing up but, realising he did not have the voice, fully focused on reaching the pinnacle of motorsport.

He holds several Formula 1 records, most notably he is the youngest ever Formula 1 champion in history after his 2010 success, which also helped former team Red Bull clinch their first ever World Constructors' Championship.

He also has the highest number of consecutive Formula 1 race wins with nine straight victories in 2013.

Sebastian Vettel got his first big break in Formula 1 at the United States Grand Prix in 2007, called up by BMW Sauber to replace Robert Kubica who was rested following a huge crash at the previous race in Canada. At the time, Vettel became the youngest driver to ever take part in Formula 1 weekend until Max Verstappen broke that record in 2015.

Vettel finished P8 on his Formula 1 debut and was soon snapped up by Red Bull, who placed him in their junior team at Toro Rosso. Scott Speed was the driver to make way for Vettel with seven races remaining in the 2007 season.

The 2007 Japanese Grand Prix provided one of the major early flashpoints in Vettel's career. In treacherous conditions, Vettel was on the cusp of the top three when he collided with a future team-mate in Mark Webber. Vettel finished P4 in the following race in China, ending his maiden season with six World Championship points.

Vettel was retained by Toro Rosso for the 2008 season and, at the Italian Grand Prix, became the then youngest ever Formula 1 race winner at the age of 21 and 73 days and gave Toro Rosso their first ever race win. After finishing the season in P8 with 35 points, a promotion to the Red Bull senior team to replace the retiring David Coulthard came his way.

The 2009 campaign would bring a further four Formula 1 victories, but he fell short of winning the World Championship title as he finished runner-up to eventual World Champion, Jenson Button.

In 2010, Vettel became the youngest World Championship winner of all time after beating Fernando Alonso, Webber and Lewis Hamilton to the title with 256 points in a thrilling four-way battle, victory at the season finale in Abu Dhabi sealing an historic first piece of silverware.

His title defence in 2011 was a mighty one. With four races of the season remaining, Vettel became the youngest ever double World Champion and also the youngest back-to-back champion. He finished the season with 392 points, 122 points clear of nearest rival Button.

If the title race involving Vettel was close in 2010, 2012 was even closer. Four consecutive race wins in Singapore, Japan, South Korea and India brought Vettel back strongly into title contention. A great recovery drive from the pit lane to P3 in Abu Dhabi ensured that Vettel had a 10-point gap to old foe Alonso with two races left in the season. A nail-biting finale ensued, with Vettel's battling P6 finish enough to clinch a third World Championship, just three points ahead of Alonso.

2013 saw Vettel become the fourth driver in Formula 1 history to win four consecutive World Championship titles and did so with a relentless nine-race winning streak from round 11 to the final race of the season (round 19). He amassed 397 points in the process.

The 2014 campaign, though, would be Vettel's last at Red Bull. He failed to win a single race throughout the season and was outscored by a new team-mate in Daniel Ricciardo. Vettel did have another year to run on his Red Bull contract, but 2015 would see Vettel fulfil a lifelong dream by signing for Ferrari.

Vettel claimed his first win for Ferrari in only his second race for the Scuderia at the Malaysian Grand Prix and another two victories would follow in Hungary and Singapore. However, it would not be enough for Vettel to become a title contender as Mercedes continued their firm hold on Formula 1. He finished the 2015 season in third place with 278 points.

A frustrating, winless season in 2016 would follow next for Vettel as Ferrari slipped down the pecking order behind both Mercedes and his former team Red Bull in the Constructors' standings. A P4 finish with 212 points represented a low point in Vettel's Ferrari career.

There was somewhat of a Vettel resurgence in both 2017 and 2018, but he could still only finish runner-up to Lewis Hamilton in the World Championship on both occasions. The 2017 season ended with five wins for Vettel and 317 points and, in the following year, a further five victories and 320 points.

Shades of 2014 returned, though, in 2019 as Vettel was once again beaten by a new and relatively inexperienced team-mate in Charles Leclerc. A solitary win in Singapore was not enough to prevent Vettel from slipping to P5 in the standings with 240 points.

And as it turned out, that was merely the beginning of the decline as Ferrari confirmed Vettel's days were numbered by stating that his contract wouldn't be renewed for 2021 before the 2020 season had even started.

On track the results were also dismal for Vettel who regularly struggled to get anywhere near team-mate Leclerc in the underpowered SF1000, even hinting at times that the Scuderia were giving him inferior machinery.

Vettel did manage to take a podium finish at the 2020 Turkish Grand Prix as the veteran took advantage of a late error from his team-mate, but across the 17 races Vettel only made the points on six occasions. Q2 eliminations also became a regular occurrence.

Vettel though opted against retirement and instead signed with Aston Martin for 2021 as the team searched for some star power to aid their return to the sport.

Sebastian Vettel began karting at a very early age and became part of the Red Bull young driver programme in 1998 aged just 11 years old. His first taste of open-wheel racing came in the German Formula BMW Championship and, in his second season in the series, became World Champion in 2004.

He made the step up to the Formula 3 Euro Series in 2005 with ASL Mucke Motorsport and finished a respectable P5 with 63 points. Following his Formula BMW ADAC success, he was given the opportunity to test drive for Williams.

More Formula 1 testing opportunities followed with BMW Sauber in 2006 and once again combined those duties with another season in the Formula 3 Euro Series. Racing for ASM Formule 3, Vettel won four races on his way to a P2 finish in the World Championship.

He returned with Carlin Motorsports again in 2007 and was leading the World Championship standings after seven rounds, but his season was cut short after being called up to Formula 1 duties on a permanent basis.

As a four-time World Champion and having driven for two of the most richest Formula 1 teams in Ferrari and Red Bull, Sebastian Vettel was one of the highest earners in the sport.

He is reported to have earned in the region £380m over the course of his well-established Formula 1 career. Vettel initially signed a three-year deal with Ferrari after parting company with Red Bull at the end of the 2014 season.

He then put pen to paper on another three-year contract extension with Ferrari in 2017, a deal which was thought to be worth in the region of £30,500,000 a year which made him the second highest earner in Formula 1 behind Lewis Hamilton.

In 2019, Vettel was ranked 30th by Forbes on the world’s 100 highest-paid athletes ahead of other reputable names such as Rory McIlroy, Rafael Nadal and Kylian Mbappe. Vettel also ranked 85th out of 100 in Forbes' world’s highest-paid celebrity list.

While Vettel's switch to Aston Martin meant a hefty pay cut, a reported £12.44m salary is hardly a sign of tough times.

Although Vettel has never been one for endorsements, he still has a decent list of backers including the likes of Casio, Infiniti, Shell and Pepe Jeans.

Sebastian Vettel is a very private person away from the race track and is one of only a select few drivers to have absolutely zero presence on social media, yet there are some details that give a glimpse into his family life.

He married his childhood friend Hanna Prater in 2019 and they have three children together. Emilie, who was born in January 2014; Matilda, born in February 2015 and a son who was born in November 2019.

His parents, Heike and Norbert, are quite often seen in Formula 1 paddock supporting their son. Sebastian Vettel also has two sisters, named Stefanie and Melanie, and a brother called Fabian who is also a racing driver.

Fabian has raced in such series as the Audi Sport TT Cup, the Lamborghini Supertrofeo and, in 2019, took part in the ADAC GT Masters as well as the 24 Hours of Nurburgring.