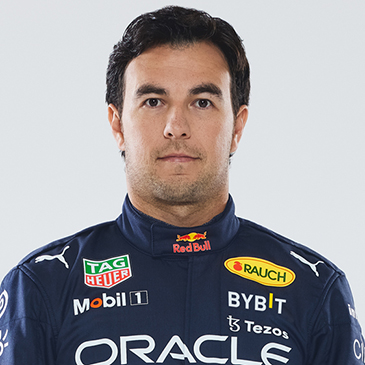 Sergio Perez is a Mexican Formula 1 driver who was born in Guadalajara on 26 January 1990.

Perez made his debut in F1 with Sauber at the 2011 Australian Grand Prix, at the time he was still a member of the Ferrari Driver Academy and remained so until 2012.

2011 proved to be a proud year for Perez as he took his first steps into F1, but a heavy crash during qualifying for the Monaco Grand Prix was an unwelcome reminder of the danger of the sport.

Perez would finish on the podium three times in 2012, including P2s in Malaysia and Italy, earning him a drive at McLaren for 2013 where he replaced Lewis Hamilton, who had left to join Mercedes.

It wasn't quite the break into a top team he had hoped for though and, after failing to make the podium, Perez's time with McLaren ended after just one season.

From there he would join Force India, helping to save the team from collapse in 2018 before continuing with them under their new identity of Racing Point.

2020 was an eventful year for "Checo" as he won his first Grand Prix from the bottom of the grid in Sakhir and finished fourth in the final standings, all on the backdrop of the announcement halfway through the season that he was being replaced at Racing Point.

It looked likely that he may have to endure a season out of the sport, but Red Bull announced post-season that Perez would be partnering Max Verstappen in 2021.

Perez is a big football fan, and he reportedly at one point thought about leaving motor racing to play professionally - he is friends with former Manchester United and West Ham United striker Javier Hernández.

In November 2012, Perez unveiled the Checo Pérez Foundation to support orphans and children with cancer - his sister Paola would also be involved with the project, as its president.

On 4 October 2010, Sauber announced that Sergio Perez would join the team for their 2011 campaign.

In signing for the team Perez became the fifth Mexican driver to compete in F1, and already at the season-opener in Australia Perez was making an impression, crossing the line P7 after being the only driver to make a one-stop strategy work.

Sadly, both Sauber cars were later disqualified for a technical infringement.

But it would be at the Monaco Grand Prix where the dangerous reality of grand prix racing came knocking on Perez's door.

During Q3 he lost control of his car upon exiting the circuit's tunnel section, swung to the right and crashed into the barrier, before sliding across the chicane and hitting the TecPro barrier with a heavy side impact.

Pérez was seen holding his hands around his head in an attempt to protect it just before the final impact. The session was suspended, and marshals and medical personnel extricated Pérez from his car.

He suffered a sprained thigh and concussion in the crash, and did not take part in the race the following day on medical grounds.

He would return to compete in FP1 at the Canadian Grand Prix, but after that decided he still wasn't well enough and took no further part in the weekend.

Perez returned at the European Grand Prix and would finish the season with 14 points, putting him P16 in the Championship.

Sauber had announced back in July that Perez would be retained for 2012 and it was in this year where "The Mexican Wunderkind" nickname really kicked in.

In just the second round of the season in Malaysia, Perez put Ferrari's Fernando Alonso under severe pressure for the race win.

He would close to within 0.5 seconds of the two-time World Champion, but a late error would see him drop back and be forced to settle for P2 - hardly a bad consolation prize.

A second career podium would arrive for Perez at the Canadian Grand Prix after he worked his way up to P3 after starting P15.

It was a similar story at Monza as Perez started P12 but made it all the way to P2, showing expert tyre management on the medium compound in his second stint, passing the likes of Kimi Raikkonen, Nico Rosberg, Felipe Massa and Alonso.

He would finish the season P10 in the Drivers' Championship with 66 points, six clear of Kobayashi.

With Hamilton's departure from McLaren to Mercedes confirmed, Perez had been announced as a McLaren driver for 2013 where he would partner 2009 World Champion Jenson Button, meaning he was no longer part of the Ferrari Academy.

The Woking outfit hadn't quite been on the title-winning pace in 2012, but the following year would prove a real struggle.

Perez would start the Malaysian GP from P9 and finish there, giving him his first points for McLaren while he also recorded the fastest lap.

Tensions rose between Button and Perez, with the Briton saying he hadn't battled against a team-mate as "dirty" as Perez before.

Perez then made another enemy in the form of Kimi Raikkonen who said that the Mexican should be "punched in the face" after they collided in Monaco, resulting in retirement from the race for Perez.

He would finish P11 in the Championship with 49 points and on 13 November 2013 confirmed that he would leave McLaren after one season and signed a 15-million-Euro deal to partner Nico Hulkenberg at Force India.

Perez would secure Force India's first podium since 2009 in Bahrain and fought for a top three spot again in Canada before suffering braking issues. On the last lap he was shunted out of the race by Massa, though the stewards deemed it to be Perez's fault and he was given a five-place grid penalty for the next race.

He would end his first season with Force India P10 in the Championship with 59 points, but delivered his best season to date a year later, claiming P3 in Russia en route to P9 in the standings with 78 points, 20 clear of Hulkenberg.

Two further podiums followed in 2016 at the Monaco and Azerbaijan GPs as Perez recorded a career-best P7 finish in the Championship with 101 points.

For 2017 Perez had a new team-mate in the form of Esteban Ocon - the duo would endure a few tense moments after Perez refused to let Ocon past in Canada, while they then made contact in Baku.

Overall though it was another solid season for Perez who finished P7 again with 100 points, 13 ahead of Ocon.

Perez secured an eighth podium finish at the 2018 Azerbaijan Grand Prix, passing Sebastian Vettel for P3 and becoming the first driver to finish on the podium twice in Baku.

But come the Hungarian GP, Force India were placed into administration. Perez would play a vital role in saving the team after a group of creditors, including Perez, took legal action against them to save Force India and its employees from a winding-up order instigated by other creditors.

Force India's assets would be purchased by Canadian billionaire Lawrence Stroll, and P5 in the Belgian GP for Perez suggested the team were back on track.

It was inevitable though that with Lawrence Stroll now in charge, either Ocon or Perez would be making way for his son Lance Stroll who was racing for the struggling Williams team.

Although some of his tactics were underhanded to say the least, it was Perez who retained his drive for 2019, with Stroll becoming his team-mate.

Perez would easily get the better of the young Canadian, scoring 52 points to his 21 to finish P10 in the Championship, but he spoke of how the Force India "legacy" was still hurting the team.

On 30 August, Perez signed a contract extension until the end of 2022 with the team now known as Racing Point.

The 2020 season brought off-the-track difficulties for Perez, as he had to miss two races due to testing positive for COVID-19 and he was also hit with the news in September 2020 that he was to leave Racing Point at the end of the season, despite his superior performance to that of team-mate Stroll.

Checo did not let the uncertainty of his place on the 2021 grid influence his performance, though, as he consistently achieved top 10 finishes before his greatest day in Formula 1 came in December.

Just a week on from suffering an electrical problem with three laps to go when he was on course to finish third, Perez picked himself up to put in a remarkable performance at Sakhir. He went from bottom of the grid to first place to claim his first ever Grand Prix victory in his 190th attempt.

Formula 1 supporters around the world were saddened at the thought of Perez not having a seat for the following season after finishing P4, but Red Bull did snap him up.

They went against their usual model in order to bring him in to replace Alex Albon and partner Max Verstappen in 2021.

Sergio Perez's karting career began in 1996 at the age of six, winning his first junior title just a year later.

He would eventually move to European racing and spent two seasons racing exclusively in the Formula BMW ADAC, finishing P19 with Team Rosberg in his first season and improving to P6 with ADAC Berlin-Brandenburg in the following campaign.

His first and only title success in open-wheel racing came in 2017 after he won the British Formula 3 Championship as a member of the T-Sport team.

His last stop before making the climb to Formula 1 was in the GP2 series, racing for Campos, Arden and Barwa Addax. His final GP2 season with the latter team in 2010 was the closest Perez got to landing another title.

He won five of 20 races to finish runner-up in the series to one Pastor Maldonado. He still did enough, though, to earn a seat with the Sauber F1 team in 2011.

Reports on Sergio Perez's Racing Point 2020 contract vary, with his salary not including sponsorships believed to have been somewhere in the region of £2.5million to £4million.

Checo's earnings on his new deal with Red Bull are yet to be reported.

Sunglasses brand Hawkers were also a personal sponsor of Perez, but that partnership ended when Hawkers published a disrespectful tweet about Mexico.

Perez's net worth is reported to be £22million.

Sergio Perez is the youngest child of Antonio Perez Garibay and Marilu Pérez. He has an older brother, Antonio, and an older sister called Paola.

Sergio Perez married his partner Carola Martinez in 2018 and the couple have two children. Sergio Perez Jr and Carlota.